On 26 September 2019, H.E. Huang Qinguo, Ambassador of the People’s Republic of China to the Commonwealth of The Bahamas, and his wife Madame Zheng Chuncao held a reception celebrating the 70th anniversary of the founding of the People’s Republic of China. H.E.The Most Hon. Cornelius Smith, Governor-General of The Bahamas, His Lordship The Hon. Brain M. Moree, Chief Justice, The Hon. Peter Turnquest, Deputy Prime Minister and Minister of Finance, the Honourable Marvin Dames, Acting Minister of Foreign Affairs and Minister of National Security, other Senior Bahamian officials together with over 200 diplomats, representatives of local Chinese communitity and Chinese enterprises, and other Bahamian friends attended the reception. 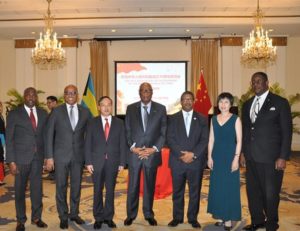