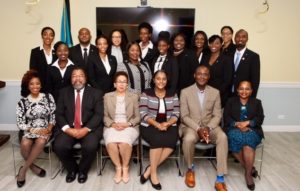 The four-week Programme provided a comprehensive orientation to the Ministry of Foreign Affairs, with  presentations on various thematic areas related to the Foreign Service of The Bahamas, including, among other areas, The Bahamas’ bilateral relations with resident diplomatic missions, international trade, sustainable development and gender issues.  The Programme also included field visits and foreign language training. The new recruits took up their assignments immediately after completion of the Programme.

The Hon. Darren A. Henfield, Minister of Foreign Affairs, addressed the new recruits during the opening of the Induction Training Programme.

Seated from left to right:

Standing from left to right: 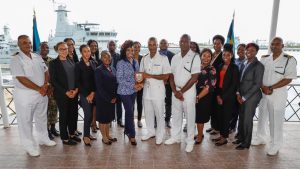 Commodore Tellis Bethel receives new recruits from the Ministry of Foreign Affairs during a field visit to the Royal Bahamas Defence Force (RBDF) base on Thursday, 22nd August, 2019. 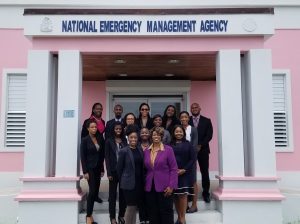 Ms. Crystal Glinton, Deputy Permanent Secretary and new recruits from the Ministry of Foreign Affairs stand in front of the National Emergency Management Agency (NEMA) on Thursday, 15th August, 2019,  following a presentation by Ms. Glinton on the operations of NEMA.